May 19, 2014, Redwood City, California – Pulmonx, an emerging leader in interventional pulmonology, announced today that multiple clinical abstracts examining the diagnostic and therapeutic utility of its Chartis Pulmonary Assessment System and Zephyr® Endobronchial Valve (EBV) are being presented at the American Thoracic Society International Conference in San Diego. The Zephyr® EBV is commercially available in Europe as well as other international markets and is an investigational device in the United States.

Of particular interest, the Chartis Pulmonary Assessment System was featured during a symposium in the presentation titled “New COPD subgroups according to prevalence and distribution of interlobar collateral ventilation assessed by an endobronchial catheter system.”

Historically, prevalence and distribution of Collateral Ventilation (CV) in emphysematous lungs are not well described and studied endobronchially under physiological conditions. This study marks the first comprehensive investigation of the presence of Collateral Ventilation by lobe in a large patient population. The retrospective study included the analysis of 325 Chartis assessments conducted in 125 COPD patients with severe emphysema.

“It appears that many late stage emphysema patients may be candidates for EBV therapy based on this extensive data set”, said Ralf H. Hübner, M.D., Charité University, Department of Internal Medicine, Division of Infectious Diseases and Pulmonary Medicine.

“These study results reinforce what I have generally experienced in my own practice.”

This dataset represents the largest retrospective analysis to-date using the Chartis Pulmonary Assessment System. The authors concluded that more than two-thirds of all patients had at least one CV- lung lobe and were potentially good candidates for the Zephyr® EBV therapy.

Further information on this study and the other abstracts may be found at conference.thoracic.org/2014/.

The Zephyr® Endobronchial Valve is a minimally invasive device intended to treat patients with emphysema. Emphysema patients suffer from hyperinflation, an increase in volume of the diseased portions of their lungs, which then compresses the healthier areas. The Zephyr® EBV therapy involves bronchoscopic placement of one-way valves designed to reduce the hyperinflation in the diseased portion of the lungs, thereby improving the ability of the healthier portions of the lungs to function. The Zephyr® EBV received the CE Mark in 2003. Since becoming commercially available in Europe and select countries worldwide, the company estimates that it has been used to treat over 7,500 patients.

The Pulmonx Chartis Pulmonary Assessment System provides pulmonologists with lobe-specific information about a patient’s lung, enabling physicians to plan valve treatments to account for anatomical variations in the lungs of individual patients which impact the effectiveness of the valves. The addition of the Pulmonx Chartis assessment now ensures that a very high percent of treated patients will experience benefit from EBV treatment. The Chartis Pulmonary Assessment System and accessories are FDA 510(K) cleared devices.

Pulmonx, based in Redwood City, California, and Neuchâtel, Switzerland, is focused on developing and marketing minimally invasive medical devices and technologies for the diagnosis and treatment of pulmonary disorders.

Revolutionary treatment allows patients get their breath back 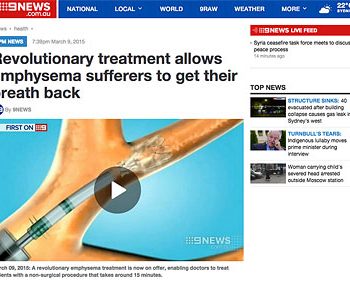